VAXIMM’s technology is based on first-in-class oral T-cell activators that can be readily adapted to target a wide range of cancer-related antigens.

The platform is based on the live attenuated bacterial vaccine strain Ty21, which has been administered to millions of people as a prophylactic vaccine to temporarily protect them from typhoid fever. This strain has been proven to be very safe and well tolerated. All immunotherapies resulting from this platform are taken orally by the patient.

After oral ingestion, the modified Ty21a bacteria, which contain the cDNA of the desired cancer target(s), pass the stomach and invade the patient’s Peyer’s patches located in the small intestine. Uptake of the bacteria in macrophages, the eating cells present in these lymphoid tissues, leads to strong expression of and subsequently to a specific cellular immune response towards the encoded cancer antigen(s). These so-called “killer” T-cells then destroy the respective antigen expressing tumor or tumor stroma cells.

The oral bacterial technology enables delivery to the most immunocompetent organ of the body, targeting the lymphatic tissue of the gut, and has been shown to generate robust T-cell responses against many different antigens in animals and humans in first clinical studies. The low therapeutic doses required for specific T-cell activation make this approach suitable for continuous dosing (prime and boost administrations), without raising anti-carrier immunity, and provide another safety margin for carrier-related toxicity. The platform is suitable for addressing multiple targets with one treatment and can be combined with additional immune therapies. Another major advantage of this approach is the high modularity (plug and play), the low cost and robustness of the production process, and the rapid development timelines taking products from concept to clinical stage. 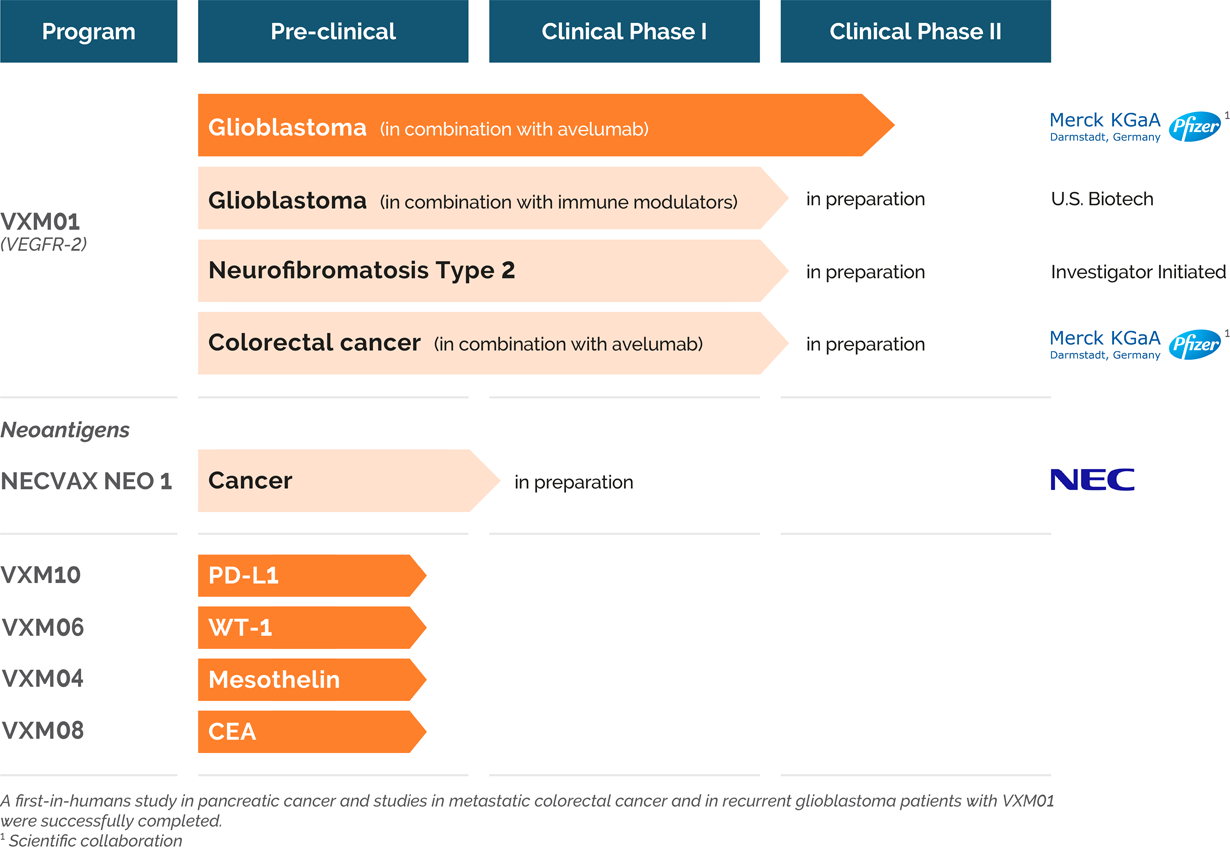 A Phase I/II trial in advanced pancreatic cancer showed that VXM01 was well tolerated and led to the activation of VEGFR2-specific cytotoxic T-cells, which was associated with significantly improved patient survival. A clinical Phase IIa trial in metastatic colorectal cancer also has been completed, and a trial in this indication in combination with avelumab is planned.

A Phase I trial was designed to evaluate the safety and tolerability of VXM01, as well as clinical and immunogenic response, in patients with recurrent glioblastoma. Fourteen patients were treated with VXM01, including three who were also treated with the anti-PD-1 checkpoint inhibitor, nivolumab. Of the fourteen patients treated, one patient experienced an objective response with VXM01 monotherapy and a durable response with the addition of nivolumab. During the observation period of up to 20 months, seven patients were still alive, all of them living for more than one year.

A Phase I/II trial evaluating VXM01 in combination with avelumab, a human anti-PD-L1 antibody, for the treatment of glioblastoma has been completed. The trial is part of a collaboration agreement with Merck KGaA, Darmstadt, Germany and Pfizer Inc.

VXM01 has received orphan designation from the European Commission and from the US Food and Drug Administration (FDA) for the treatment of glioblastoma.

Technological innovations have made it possible to identify tumor-specific mutations, which lead to neoantigens or neoepitopes. Targeting neoantigens by generating specific cytotoxic T-cells has become a major factor in the development of clinical immunotherapies against cancer.

VAXIMM’s neoantigen program is in preclinical development and has already shown immune proof of concept; the platform allows for fast generation and delivery of personalized T-cell vaccines and may overcome key issues with other neoantigen approaches. A clinical Phase I basket study in collaboration with NEC (NECVAX NEO1 program) is currently in preparation. Additional programs are in pre-clinical development and can be developed as stand-alone therapies or in combination with other immunotherapies.

VXM04 carries human mesothelin as the target antigen. Mesothelin is a protein that is overexpressed in several solid tumors, including mesothelioma, ovarian cancer and pancreatic adenocarcinoma. In preclinical studies, VXM04 has shown potent T-cell activation against mesothelin and stand-alone therapeutic activity in models of pancreatic cancer.

VXM06 carries a modified Wilms Tumor Protein (WT1) as the target antigen. WT1 is overexpressed in several hematological malignancies and solid tumors, including acute leukemias, glioblastoma, colon cancer, pancreatic adenocarcinoma, and ovarian cancer. In preclinical studies, VXM06 has shown potent T-cell activation against WT1 and stand-alone therapeutic activity in models of leukemia. The safety profile of VXM06 has been demonstrated in a 3-month toxicity study in animals.

VXM10 targets PD-L1, an immunomodulatory antigen upregulated in many solid tumors as well as hematological malignancies. VXM10 is currently in preclinical development and has shown stand-alone therapeutic activity in models of leukemia.

A phase 1 trial extension to assess immunologic efficacy and safety of prime-boost vaccination with VXM01, an oral T cell vaccine against VEGFR2, in patients with advanced pancreatic cancer

VXM01 phase I study in patients with operable progression of a glioblastoma to examine safety, tolerability, immune and biomarker response to the VEGFR-2 DNA vaccine VXM01

A phase 1 trial extension to assess immunologic efficacy and safety of prime – boost vaccination with VXM01, an oral T cell vaccine against VEGFR2, in patients with advanced pancreatic cancer

Preclinical studies related to a phase 1/2a TRIAL to investigate the immunologic impact, anti-tumor efficacy and safety of VXM01, an oral T-cell inducing vaccine, in late stage colorectal cancer patients

Double-blind, placebo-controlled first in human study to investigate an oral vaccine aimed to elicit an immune reaction against the VEGF-Receptor 2 in patients with stage IV and locally advanced pancreatic cancer

We use cookies to enable you to optimize your use of the website. Please decide yourself whether you want to accept these cookies. Please note that in the event of rejection, not all functionalities of the site may be available.

Any cookies that may not be particularly necessary for the website to function and is used specifically to collect user personal data via analytics, ads, other embedded contents are termed as non-necessary cookies. It is mandatory to procure user consent prior to running these cookies on your website.